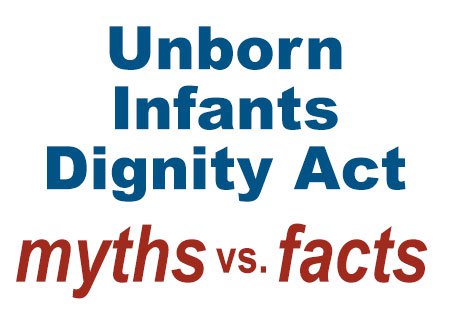 It is not surprising that AUL’s Unborn Infants Dignity Act (UIDA), first offered in 2015, is vehemently opposed by the abortion industry.

While the model legislation does not impede a woman’s ability to obtain an abortion, abortion advocates despise any recognition that unborn children are humans, and that families facing miscarriage, stillbirth, or elective abortion often experience great sorrow.

The abortion industry and their friends in the media have unleashed their favorite weapons against the UIDA—deception and obfuscation. Below are factual responses to eight of their most outlandish claims against the UIDA.

The UIDA mandates burial or cremation services for fetuses, regardless of gestational age.

The UIDA does not regulate the disposition of fetal tissue from early first-trimester abortions or miscarriages. The UIDA provides that the “bodily remains” of infants who have reached a stage of development so that there are cartilaginous structures and/or fetal or skeletal parts” and who are “expelled or extracted” at an institution must be either cremated or buried.[1] An “institution” is carefully defined as an entity that provides healthcare services—not a patient’s home.

In other words, a healthcare provider at an institution must make a clinical determination whether the remains of an infant are developed enough to warrant the application of this law. Further, this law places no burdens or requirements on a woman who expels her unborn infant at home.

The UIDA will require women to collect fetal tissue in their homes or hotel rooms following abortion or miscarriage.

As discussed above, the UIDA applies to healthcare “institutions”—not patients’ homes. The only time that the UIDA would minimally impact a woman in her home or hotel room would be if, as part of her care, her healthcare provider sends someone to collect the infant’s remains (thus requiring the healthcare provider to comply with the law). Women who miscarry or complete their abortions at home should follow their healthcare providers’ instructions.

The UIDA attempts to establish in science and law that a fetus can die and is a distinct, living being.

The UIDA is not needed to establish scientific facts about the fetus, and unborn infants already have legal protections in many circumstances. The bodies of unborn infants are not egg, sperm, or mere tissue. They are not part of another person’s body. In fact, the humanity of a fetus has long been recognized in American jurisprudence. In Gonzales v. Carhart, the Supreme Court held that “by common understanding and scientific terminology, a fetus is a living organism while within the womb, whether or not it is viable outside the womb.”[2]

Further, numerous laws recognize that unborn infants are humans or “persons” (e.g., laws that prohibit crimes against unborn infants, permit parents to sue for wrongful death on behalf of their unborn infants, and provide inheritance rights to unborn children).

The UIDA requires funerals for fetuses.

Funerals are not mandated by the UIDA or any law regulating the disposition of fetal remains. In a perfect world, every deceased person would be mourned. Unfortunately, the best that a state can require is for the body of every human being, regardless of age or development, to receive a respectful disposition after death. The UIDA simply requires dignified treatment in its most basic form—that unborn infant remains not be incinerated or otherwise thrown out with medical waste.

Crematoriums already cremate the bodies of infants who die prematurely. Across the country, families are permitted to bury or cremate their miscarried or stillborn infants at certain gestations. Further, the UIDA gives states and even institutions freedom to determine how to implement the burial/cremation requirement.

For instance, the UIDA does not expressly prohibit group disposal. In Planned Parenthood v. Minnesota, the Eighth Circuit Court of Appeals addressed group disposal as the practice of burying or cremating simultaneously the remains of more than one abortion or miscarriage. . . . [One hospital] disposes of the remains of abortions and miscarriages where development is less than 20 weeks by individually packing and storing the remains, then boxing the remains en masse for cremation by a local cemetery. The cemetery then buries the ashes on its grounds. The cost per box is $50.00.[3]

The Eighth Circuit held that the Minnesota statute “should be construed to allow group disposal,” because “the intent of the statute was to preclude methods of disposal that were not associated with the notion of burial, such as disposal through the sewer system or the indifferent dumping of remains in landfills. . . .”[4]

Likewise, the intent of the UIDA is to ensure that the remains of unborn infants are not treated the same as “discarded biologic product such as blood, tissue, or body parts removed from medical facilities, as well as bedding, bandages, syringes, and similar materials. . . .” Human beings deserve to be treated with dignity and respect at death. No human body should be intermingled with waste at his/her final resting place.

The UIDA may create substantial financial obstacles to abortion, thereby making abortion inaccessible for some women.

The UIDA does not specifically designate who bears the cost of final disposition. Logically, the institution should. While abortion advocates argue that this cost will be passed on to patients, states can construct their laws or regulations to ensure that it is minimal. Planned Parenthood v. Minnesota, discussed above, provides an example—a hospital individually packed and stored infant remains, and then boxed them en masse for group disposal. The cost was $50.00 per box.

Abortion providers will not know how to comply with the UIDA because it is vague.

The Eighth Circuit rejected a claim that a fetal disposition statute in Minnesota was vague because, at times, it might be difficult to determine the need for compliance with the law (i.e., in some first-trimester abortions). Like the UIDA, the Minnesota law requires a dignified disposition once an infant has “cartilaginous structures” and “fetal or skeletal parts.” The court held that, while these cases may present challenges, “marginal cases cannot defeat the statute.”[5]

The UIDA is not concerned with the dignity of mothers.

One of the primary purposes of the UIDA is to give mothers closure and the opportunity to grieve. In some states, hospitals refuse to permit families to bury miscarried children. Many parents are not provided certificates of stillbirth to acknowledge their loss. The UIDA promotes the dignity of mothers, fathers, and their deceased unborn children.

See also: Why The Abortion Industry Wants To Ban Funerals For Miscarried Babies by Anna Paprocki

[1] When the infant is miscarried or stillborn, the mother may choose to donate her infant’s remains in compliance with her state’s Anatomical Gift Act.