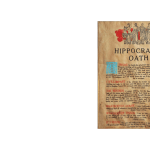 The History of Assisted Suicide.

The Hippocratic Oath is one of the oldest binding documents in history dating back to the 5th Century B.C. Its principles are held sacred by doctors to this day and still today, most graduating medical-school students swear to some form of the oath. Hippocrates was known as the father of medicine and the famous oath bears his name. One of the best know lines in the oath states: “I will prescribe regimens for the good of my patients according to my ability and my judgment and never do harm to anyone. To please no one will I prescribe a deadly drug nor give advice which may cause his death.”

From ancient times, doctors' duty is to protect and preserve the lives of the patients whom they care for. Patients place their trust in doctors to recommend what is best for them. From the time the original Hippocratic Oath was introduced, there has been a clear separation of medical care from the intentional killing of human beings.

The U.S. Supreme Court, in the Cruzan case, outlined the history of suicide and assisted suicide:

“At common law in England, a suicide—defined as one who ‘deliberately puts an end to his own existence, or commits any unlawful malicious act, the consequence of which is his own death,’ 4 W. Blackstone, Commentaries *189—was criminally liable. Ibid. Although the States abolished the penalties imposed by the common law (i.e., forfeiture and ignominious burial), they did so to spare the innocent family and not to legitimize the act. Case law at the time of the adoption of the Fourteenth Amendment generally held that assisting suicide was a criminal offense. See Marzen, O’Dowd, Crone, & Balch, Suicide: A Constitutional Right?, 24 Duquesne L. Rev. 1, 76 (1985) (‘In short, twenty-one of the thirty-seven states, and eighteen of the thirty ratifying states prohibited assisting suicide. Only eight of the states, and seven of the ratifying states, definitely did not’); see also 1 F. Wharton, Criminal Law @ 122 (6th rev. ed. 1868). The System of Penal Law presented to the House of Representatives by Representative Livingston in 1828 would have criminalized assisted suicide. E. Livingston, A System of Penal Law, Penal Code 122 (1828). The Field Penal Code, adopted by the Dakota Territory in 1877, proscribed attempted suicide and assisted suicide. Marzen, O’Dowd, Crone, & Balch, supra, at 76–77. And most States that did not explicitly prohibit assisted suicide in 1868 recognized, when the issue arose in the 50 years following the Fourteenth Amendment’s ratification, that assisted and (in some cases) attempted suicide were unlawful. Id., at 77–100; id., at 148–242 (surveying development of States’ laws). Thus, ‘there is no significant support for the claim that a right to suicide is so rooted in our tradition that it may be deemed ‘fundamental’ or ‘implicit in the concept of ordered liberty.’’ Id., at 100 (quoting Palko v. Connecticut, 302 U.S. 319, 325 (1937)). [Cruzan, 497 U.S. at 294.]”

In 1980, the first right-to-die and assisted suicide advocacy organization named the Hemlock Society was founded. The group took its name from the method by which Socrates took his life in 399 B.C., as described in Plato's Phaedo.

The Hemlock Society's primary mission was to make physician-assisted suicide legal. The group morphed into Compassion and Choices, and its founders went on the start Final Exit Network. These two organizations are the two biggest advocacy groups pushing for the legalization of suicide by physicians in states.

In a pair of unprecedented opinions in 1996, Quill v. Vacco and Compassion in Dying v. State of Washington, the Second Circuit and the Ninth Circuit held that New York and Washington are powerless to prevent mentally competent, terminally ill patients from intentionally ending their lives with the assistance of physicians who are willing to prescribe lethal drugs for them.

In recognizing a right to commit suicide with the assistance of third parties, the En banc majority in Compassion in Dying swept aside a uniform tradition of legal and societal opposition to suicide and assisted suicide that dates back to the earliest days of the common law.

Compounding this error, both the Ninth Circuit and the Second Circuit seriously misread the Supreme Court’s 1990 decision in Cruzan v. Director, Missouri Dep't of Health. Both courts attempted to derive an interest in deliberately inducing death, which the law always has treated as a crime, from the interest in refusing unwanted medical treatment, which the law traditionally has pro­tected out of respect for the inviolability of the human person. Disregarding critical distinctions between intend­ing a result and knowing that a result is likely, and be­tween causing death artificially and allowing death to occur naturally, the lower courts reasoned that because refusing life-sustaining treatment and intentionally in­gesting a fatal dose of drugs both result in a person's death, the right to do the former necessarily entails the right to do the latter.

Both cases were appealed to the U.S. Supreme Court in 1996.

Americans United for Life filed an Amicus brief in the landmark case Vacco v. Quill; Washington v. Glucksberg on behalf of Members of the New York and Washington State Legislatures.

In the brief, New York and Washington state legislators strongly argued in support of the public policy expressed in their state laws prohibiting assisted suicide and who vigorously oppose efforts to legalize assisted suicide in the legislatures or the courts. The amici firmly believe that there were no social, economic or medical grounds to permit physician assisted suicide under any circumstances, and that to allow suicide assistance, even for mentally competent, terminally ill adults, would lead to grave abuses and exploita­tion of the most vulnerable members of our community. The amici fully concurred with the warning of the New York State Task Force on Life and the Law that creation of a right to suicide "would carry us into new terrain."

“American society has never sanctioned suicide or mercy killing. We believe that the practices would be profoundly dangerous for large segments of the population, especially in light of the widespread failure of American medicine to treat pain adequately or to diagnose and treat depression in many cases. The risks would extend to all individuals who are ill. They would be most severe for those whose autonomy and wellbeing are already compromised by poverty, lack of access to good medical care, or membership in a stigmatized social group. The risks of legalizing assisted suicide and euthanasia for these individuals, in a health care system and society that cannot effectively protect against the impact of inadequate resources and ingrained social disadvantage, are likely to be extraordinary.”

WHEN DEATH IS SOUGHT: ASSISTED SUICIDE AND EUTHANASIA IN THE MEDICAL CONTEXT vii-viii (May 1994).

In its opinion, the U.S. Supreme Court unanimously held that a right to assisted suicide in the United States was not protected by the Due Process Clause.

Recently, Americans United for Life is drafting an amicus brief to file in Kligler v. Healey, an assisted suicide case currently before the Massachusetts Supreme Judicial Court (state supreme court). Our brief will take a medical stance against the idea that there is a “medically acceptable standard of care” for assisted suicide.