When Texas adopted health and safety standards designed to protect women from dangerous and substandard conditions and practices in the state’s abortion clinics, the abortion industry immediately challenged the law and took its case all the way to the Supreme Court, deceitfully arguing that abortion is safe and that the profit-driven abortion industry could be trusted to self-regulate. AUL has repeatedly exposed this argument as the “lie of the year.” 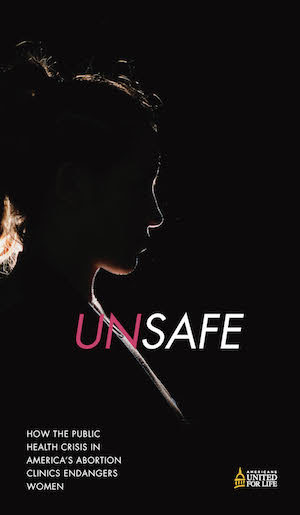 In its June 2016 decision in Whole Woman’s Health v. Hellerstedt, the Supreme Court struck down the Texas law, but indicated that such health and safety mandates would be acceptable if there is evidence of the need for such standards. Thanks to your continued support, Americans United for Life was able to respond quickly to the Court’s challenge for more evidence of abortion industry abuses.

In December 2016, we released Unsafe: How The Public Health Crisis in America’s Abortion Clinics Endangers Women, following an examination of confirmed reports of dangerous abortion clinic conditions across the nation. AUL’s latest investigative report details that at least 227 abortion providers in 32 states were cited for more than 1,400 health and safety deficiencies between 2008 and 2016 and documents hundreds of significant violations of state laws regulating abortion.

You can see the impact of AUL’s strategic report this month in both Louisiana and Kentucky!

OUT OF BUSINESS: Unsafe exposed the Bossier City Medical Suite, one of four abortion clinics in Louisiana, for  multiple violations of state health and safety requirements, and now it has been closed!

IN COURT: In Kentucky, only a judge’s order has allowed the state’s last abortion clinic to temporarily remain open while a legal challenge to the closure order brought by the EMW Women’s Surgical Center in Louisville proceeds. State officials have alleged that the clinic has not complied with a requirement that it have a transfer agreement with a local hospital to ensure that women who suffer post-abortive complications or are in need to emergency care following an abortion receive proper medical care.

Through your support, AUL’s Unsafe report is being distributed to legislators, state officials, and allies in all 50 states. You can learn more about dangerous abortion clinic conditions in your state by going to http://unsafereport.org.

Thank you for helping pro-life leaders in Louisiana, Kentucky, and elsewhere highlight and respond to the reality of unsafe abortions in America.

Our work is possible thanks to the support of Americans of all ages, backgrounds, and beliefs.

Your gift is essential to defending existing law and enshrining new law that protects human life. Begin or renew your partnership with a one-time or recurring gift.

Advance the cause for life

We share 10-12 monthly updates, featuring Americans United for Life News, updates from President & CEO Catherine Glenn Foster, and action alerts. We are powered by Americans of all ages, backgrounds, and beliefs, and we invite you to join us.

We take your trust seriously. Your information will never be shared with others.